The Danger of Groupwork without Feedback

I was reading John Hattie's Visible Learning for Teachers, which is a readable summary of a meta-analysis on thousands of studies investigating effective teaching practices. I was struck by on thing in particular:

“Most of the feedback that students receive about their classroom work is from other students – and much of that feedback is wrong.”

One of the reasons I do groupwork in my classes is so that students will support eachother. Usually, students work in pairs or groups of four. In my teacher education classes, the class sizes range from 24 to 30 students. It is difficult to monitor 12 to 15 pairs or 6 to 8 groups but I always assumed that students would be able to support each other. After reading Hattie, though, I thought that I needed to do a better job of monitoring groups.

In my "English Teaching Methodology 3" (ETM 3) class, we were reading about "Practice Activities and Tasks" in the TKT Course Module 1,2,3. I gave three questions to the class about the main ideas of the chapter and had them answer these questions in pairs. This time, though, in our Wordpress class blog, using WPDiscuz, I posted each question as a comment on the lesson page for that day. The groups then had to post their answers as replies to the comments (See below).

To my surprise, most of the pairs answered the below question incorrectly.


2.What is the difference between skill-based and language based activities? Can you provide and example from the New Crown or Sunshine textbook? 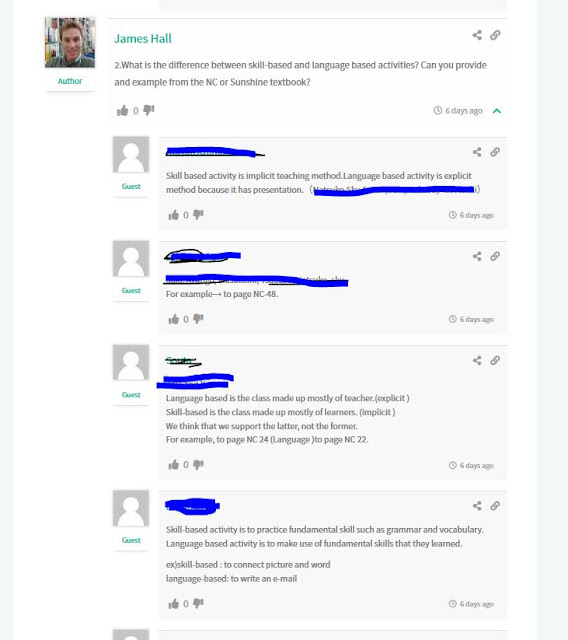 I actually thought the concept of skill and language focused lessons would be easy for students to grasp. Because I could see students' comments, we could discuss the issue deeper: I could understand what many of the students were thinking and they could understand what I wanted the to learn. I saw one way that technology could be used as a means for the teacher to understand the extent to which students are grasping comments and make the appropriate intervention.

The past few years, I have been using ePortfolios in my English Teaching Methodology classes. I experienced one incredibly significant problem for almost three years but because of my own stubbornness continued to use wordpress multisites. Wordpress multisites are a network of blogs; there is a main site and then under that, a “subsites.” Each student had their own site for which to create and publish an ePortfolio detailing their development over the span of two years of taking English Teaching Methodology courses (I am an English teacher trainer). 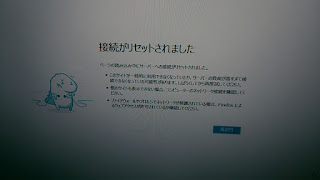 The server provider, Godaddy, said that it was a university network problem. I pestered the university network technicians for a couple of years. At first, they were incredulous that it was a problem with the university network. At the same time, Godaddy seemed to be equally incredulous that is was a problem on their end. This is an important point: for IT, we rely on different service providers and when there is a problem, they are likely to point their fingers at one another. It becomes the client’s job to provide enough evidence to one of the providers that the issue is likely with them.

I was able to confirm that the ePortfolio URLs were not being blocked by the university firewall. Additionally, the network administrator asked our network provider to come to the university and conduct tests. They confirmed that a signal was actually leaving the university network but not returning as it should. With this information, I called goDaddy support. The first time, the person on the phone said that he believed me but could not give me an answer why this problem was occurring. I called goDaddy support again about a week later, and the person on the phone said that I was on a shared server plan and the server cannot provide enough resources to have 30 people log in at once. BINGO. That was the issue we had been experiencing for over two years! Why did it take so long? Afterwards, I read “Wordpress for dummies” and it said that Wordpress Multisites will not work well on a shared server.

The morals of this story are

Gosh darn it has been a long time since my last post. The past four years I have finished my PhD, been continuing to work on various projects, and have been raising a family. I thought that writing a blog would take away from other things, but I am starting to realize that writing is a better way to learn something than just reading.

I have a new and improved home page here: https://logos.edu.iwate-u.ac.jp/jhoffice/james-m-halls-homepage/

That is all for now.