Giving a Workshop at the ALT mid-year Conference 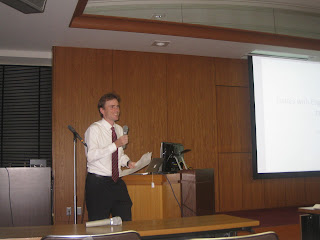 Well, October was a busy month and really flew buy. The new semester started at my university, I started a PhD program, I went to the JALT conference in Shizuoka, I had to write a laboriously tedious grant application, and I planned and conducted an open "research class" with my university's affiliated elementary school. I would actually like to write about all of these but today, I want to tell you about giving a talk at the Iwate ALT mid-year seminar in early October. At the seminar, there were about 25 ALTs and 15 JTEs (Japanese teachers of English). This was a very workable number. I only had 90 minutes and I wanted to do some thing that hopefully would be of some use for the ALTs. I know that no matter how amazing an educator you are (and I am a pretty mediocre one), after 90 minutes you are not going to reinvent the way someone teaches.

When planning for the seminar, I thought back to the days when I was an ALT in Hokkaido for two years in the late nineties. I came to Japan knowing zero Japanese, having little experience in education, knowing next to nothing about Japanese schools, and no formal knowledge of the English language itself. I was about as unqualified for a job of teaching English as possible. I was stationed at a rural junior high school and usually my job was just to stand in class and do nothing but recite the textbook to the students when asked. Sometimes the JTE would give me 20 minutes of the class to teach. I would be very grateful for this opportunity but usually my activities were either too difficult for the students or not interesting. These days, the JET Program (the name of the scheme that brings people from abroad to assist in the teaching of English at Japanese public schools) seems to be much more selective and most of the ALTs are much more knowledgable about Japan and teaching than I was.

Nevertheless, I thought about something I could have learned that would have made me a little better at my job. Coming to Japan, my understanding was that I was supposed to assist in making English more communicative. However, what exactly does that mean? The national curriculum for English in public schools is called the gakushuu shidou youryou or the Course of Study and all English textbooks in Japan follow these guidelines. To be honest, I sometimes intuitively feel a little bit of resistance towards it because all schools MUST follow it (Whenever someone tells me I HAVE to do something, I tend to automatically NOT want to do it). However, the document itself emphasizes that English be taught as a means of communication and I believe that if more schools actually DID follow it, English education would probably be a little better.   In my two years as an ALT, though, I never heard of the Course of Study. In fact, I had no idea what I was supposed to be doing rather than "making my classes more communicative." I think now that if I had a better idea about the national curriculum (or what I was supposed to be doing) then maybe back then I could have reached an agreement with the JTE about what our goals were and tailor the activities to try to accomplish these goals. With this in mind, here is how I conducted the workshop:

Part 1 - Icebreaking: We played four corners. The signs agree, disagree, I don't know, and I don't understand are each posted in a corner of the room. I give the participants a statement and they go to the corner which best reflects their feelings. Here are the questions I gave them:
1. I think Japanese food is better than the food in my country.
2. The goal of English Education in junior and senior high schools is for students to become high level communicators of English...
... and others......

Part 2: Introducing the course of study for English education. On Powerpoint I showed them the objectives and recommended content for JHS and SHS English classes. This was written in English but I left blanks in the text and read every thing in Japanese. The ALTs, consulting with the JTEs if necessary, had to try to guess what filled in the blanks.

Part 3: Challenges: Next, I discussed obstacles for achieving the objectives in the course of study based on my experience as an ALT and the limited knowledge I have about English education in Japan. The challenges I discussed were:

I System and Environment
1. High school and university entrance exams
2. Teachers' workloads
3. The communicative goals of the course of study are a little ambiguous.
4. Teachers have to follow a curriculum made by their department.
5. The total number of hours spent in the English classroom in JHS and SHS are insufficient (see a previous blog post)

II People Factors
1. Unmotivated students
2. ALTs lack of knowledge of Japanese, Japanese schools, education, and English teaching (I am talking about myself!)
3. ALTs unwilling to cooperate
4. JTEs do not want to work with ALTs (I think this is a big problem)
5. JTEs cannot or do not explain to ALTs their schools situation, the ALT's role, or give the ALT guidance.
6. JTEs can lack understanding of how to make classes more communicative
7. Some JTEs have insufficient command of English (only a few!)

Part 4: Ways to achieve the goals: In Part 3, I was kind of hoping that someone would try to argue against me but no one did. In Part 4, I took a more optimistic view and said that actually most Alts and JTEs care very much about their students' learning and are very innovative. Also, relatively speaking in very general terms, Japanese JHS and SHS students can be easy to work with. My suggestions were that 1. JTEs and ALTs discuss how they want students to get out of their classes; 2. JTEs and ALTs discuss the kind of teachers they want to be; 3. JTEs and ALTs make plans to routinely conduct a small repertoire of activities to push students and themselves towards their goals. Lastly, I discussed my own goals for my students and the kind of teacher I aspire to be (but am not). Then, I conducted a learning activity I had designed to try to meet these goals. The activity was a task-based activity. I read a picture book in Japanese (showing the pictures on the computer). This was perhaps the most well-received part of the workshop.

Overall, the content of my workshop was probably something that the Japanese English teachers had heard many times: The Course of Study and having thinking about a goal for your students before planning your classes or curriculum. However, when I was an ALT, I never heard any thing like that. I hope that they found it useful.

Epilogue: After the workshop, I went to Hanamaki station to go home. To my surprise, who should I meet in the station but the former K-1 kickboxing champ Ernesto Hoost! He was in Iwate to film an NHK television special. He was nice enough to take a picture with me: 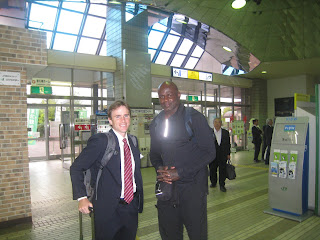