Doing a Task at an Elementary School

On October 31, my universities affiliated elementary school had an "Open Class Conference" (公開授業研究会). As a "collaborative researcher" I teamed up with teachers in the "English study group" (英語班) to plan two classes. The first class was a picture book class with the third grade and the second class was a class using "tasks" with the fifth grade. With all modesty possible, I have to say that both classes were much more successful than I anticipated. In this post, I will talk about the task based class and (hopefully) in a future post discuss the picture book class.

Last June, I went to Sendai with the head of the English study group (Hereafter T Sensei) at the elementary school and a graduate student. We attended a lecture by Dr. Natsuko Shintani about TBLT (Task Based Language Teaching) for young learners. This was a great opportunity for both me and T-Sensei to get on the same page about what TBLT is and understand the types of tasks used with young learners. We left the workshop with a common understanding about the principles of TBLT. However, the tasks that were shown in the workshop were designed for a small group of children at an English school. We had to think how we could design a task for a large group of children (+30 students) with limited command of English and lower motivation to study English.

The four features of tasks introduced in the workshop are below and based on the features we designed two tasks.
The tasks we did were information gap tasks which are very typical and might make you wonder why I would write a blog post about doing such a ubiquitous activity. Although the type of activity was far from innovative, I will say that the way we adapted the information gap task to their textbook "Hi, Friends 1, lesson 7  What's this" and thought of a way to make it interesting for the students was creative.

The modest success of this lesson was a result of the collaboration between me, the elementary school, and my graduate students. We met two times for about 90 minutes each time (to plan the task and picture book class, not just the task class). By sharing ideas with each other and combining our strengths, we were able to think of original lessons that we could not have done by ourselves. It made me realize how important collaboration is. I will talk about the two tasks we ended up doing:

The words for the unit of Hi, Friends were

These are fairly dull words and our challenge was to think of a situation where children could use these words meaningfully.

The first task we designed was called the "locker task". It was a kind of "find the differences task."Students were in pairs, and each had a different picture of a locker. The goal of the task was to find the number of differences in two minutes. The words were words from the unit of high friends (I acknowledge that there was a BIG spelling mistake on the first set of cards). For the first two sets of cards, the teacher performed the task together with the students (the teacher had the card for Locker 1A and the students had the card for Locker 1B). After this, the students did the task twice using the next two sets of cards. It is important to note that the students were familiar with these words.

Task 2: The Magic Bag
First, I will say that task 2 was the far more innovative task and was the original idea of the elementary school teachers. 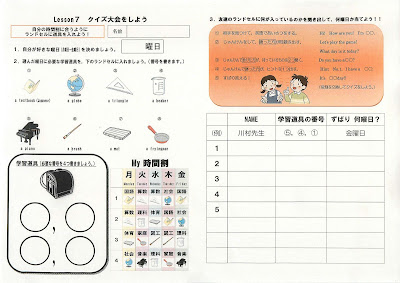 This is a little more complicated. The teacher said that all the students had a "magic bag" like Doraemon and they could put anything inside of it. The children had the above worksheet which featured a daily class schedule. The children then had to choose a day, and then based on the class schedule for the day, put objects in their bag.  For example, if the day was Friday, the classes were Japanese, social studies, science and music. A student who chose Friday would then have to put a Japanese textbook, globe, beaker, and piano in their bag. After the students had chosen the days and the corresponding contents of their bag, they made pairs again. They would ask each other, "What do you have in your bag" and write down their partners answers. After writing down what their partner said, they would try to guess the day. The goal of the task was to guess the day of the week their partner had prepared for. As in the first task, 35 of 36 students wrote that they were able to express the contents of their bag and ask their partner the contents of their bag. Twenty-seven of 36 students wrote that their teacher's demonstration was helpful although the teacher did not explicitly teach language.

Again, tasks are supposed to have the following characteristics:

Both tasks featured a focus on the message, there was a clear gap in information between the pair of students, the teacher did not explicitly teach language and students were expected to use their own language, and each task had a clear goal.

We did give questionnaires to the students to find out the techniques they used to accomplish the tasks but I have no idea when I can get around to actually analyzing them so I thought I would write about this experience before I completely forgot about it. If you would like to use these ideas for your own contexts, please feel free to do so. If possible, I would also appreciate it if you contacted me to tell me how it went.
Posted by JH at 8:53 AM

Hi Jimbo! I like your blog. All activities and tasks are very enjoyable and useful.They are also helpful for critical thinking, I use "Magic bag" in my classroom and I ask my students to guess what I have in my bag, they ask questions:"Is it big?", "Is it round?", revising "Yes/No" questions. I would like to use some of your methods of teaching in my classroom. :) Thank you!

Hi Jimbo! I like your blog. These activities and tasks are very useful and enjoyable. I also use "Magic bag" in my classroom and ask my pupils to guess what I have in my bag. They ask alternative questions: "Is it big or small?", "Is it round or square?"...These activities that i saw in your blog are very helpful for critical thinking. I would like to use some of them from your experience.Thank you! Good luck! :)

Hi Jimbo! I like your blog. These activities and tasks are very useful and enjoyable. I also use "Magic bag" in my classroom and ask my pupils to guess what I have in my bag. They ask alternative questions: "Is it big or small?", "Is it round or square?"...These activities that i saw in your blog are very helpful for critical thinking. I would like to use some of them from your experience.Thank you! Good luck! :)

Thanks for the comment! I think that magic bag is a good activity but Japanese elementary school students would have a difficult time asking questions in English. Maybe we will try it though!