I meant to write this in my blog a long time ago. First, it took hours for me to figure out how to trace my path on google maps. After that, I weas so burned out that I did not think about this for a couple of months!

Anyway, on a Sunday in mid-October I took a 6 hour walk in Yangon and thought people could learn from my experience. When I am in Yangon on non-working days, I am usually by myself and can only go so long without other human contact. Invariably I am approached by people in Yangon and end up striking up a conversation with them. When I am visiting a famous attraction, a polite and usually articulate person will approach me with the intention of extracting money from me in some manner. In countries like Thailand, I successfully avoid these people; I have read about the scams in Lonely Planet, 地球の歩き方, or the internet, and I am confident in identifying scammers.

Myanmar, though, is different. It is harder for me to understand the extent of people's sincerety. I really have no references in the guide books about what to do when people approach you at famous attractions so I basically go with my instinct.

So, let me talk about my walk. I started near Boyoge Market at the Point A at the bottom of the map and walked to Shwedagon Pagoda. It took a little over 30 minutes. Basically, I spent 90 minutes walking around extensive grounds surrounding the pagoda and absorbing the atmosphere. The central stupa has altars (fountains and a stand for burning incense) representing days of the week placed arounds its perimeter. People will go to the altar for the day of the week they were born and pray. I used the available wifi to look up the day of the week which I was born, Friday. I was too shy to pray though because I did not know how. As I was about to leave, an elderly man with an official tour guide badge caught me at the exit. After some small talk, he offered to show me how to make a prayer at the "Friday corner" (See below). My tour guide walked very slowly and I wondered how he could take someone on a tour of the whole premises. 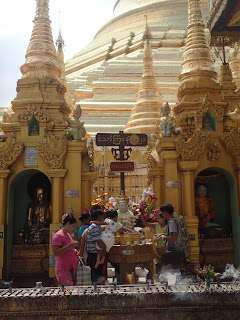 Since nearly three months have passed, I have forgotten the exact order of procedures but I will recount what I remember. First, we prayed for my health and poured a cup of water over the head of the Buddha. After that we prayed for my success, love life, family, and something else followed by pouring water over the statue. The man was very erudite, and elderly.  He guided me in a very gentle manner and he seemed to be very sincere and genuinely interested in teaching me something as well as looking out for my welfare. He said that he was a former history professor but that the government had denied his pension. He was making a living by acting as a tourguide. He told me he needed about 10,000 kyat (about 10 US dollars) to pay off work-permission fee to the pagoda. I gave it to him and said good bye. The man stayed behind at the Friday corner to pray some more. 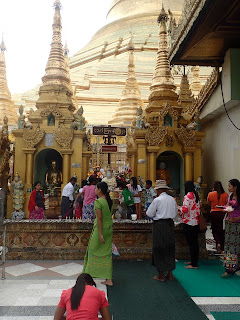 Next, I walked from Shwedagon Pagoda towards Boyoge Park. Below is a picture of the street near the rotary on the map. The way to cross the street is to run to the median strip when you can and wait there for an opportunity to cross the other side of the street. I usually run when crossing the street in these situations because it is difficult for me to judge how fast the cars are going and they don't really slow down or brake for pedestrians. 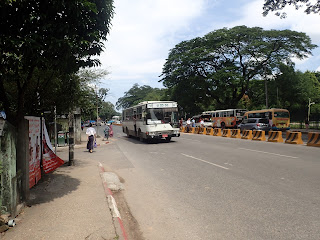 My goal was to walk to the reclining Buddha by taking some back roads. I had my iPad with me which seemed to show a way to take the backroads. However, I ended up getting lost on Ngar Ptit Gyi Pagoda Street. Below is a picture of the street. 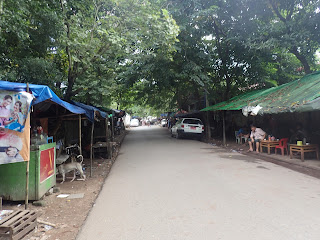 To my interest, I ended up walking by a monastic school for disadvantaged youths. Little did I know that I would actually be visiting the school later in the day. 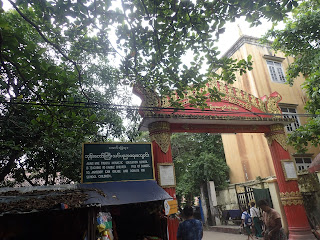 After walking for another 5 minutes, I realized that I was INCREDIBLY thirsty to the extent that I felt too weak to walk. Fortunately, I found a eating establishment on the side of the road and was able to get a glass bottle of pepsi. There is nothing like drinking cold soda out of a glass bottle in a tropical climate to wet a parched throat. After leaving the restaurant, some gentlemen on the side of the road told me I was going the wrong way. He said something and then pointed to a pathway. I wanted to go to Chauk Htat Gyi or the reclining Buddha. However, I realized that I had absolutely know idea how to pronounce Chauk That Gyi so I hadn't the faintest clue what the man was directing me to. I decided that it must be the reclining Buddha so I took the small path. The picture below is the small path and is represented by the small black line on the map (To the right of the hospital). 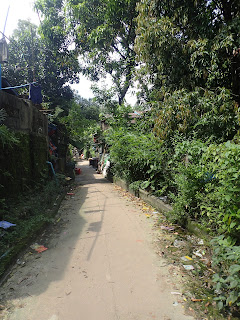 The path seemed to zigzag quite a bit and I really had no idea where I was. Eventually, I ended up on what seemed to be Shwegadon Pagoda Road. The Reclining Buddha was supposed to be off this road so I was close. However, my iPad was no longer able to show me my location and I could not get my bearings. Also, by this time, I was really starting to feel hot and tired. I am not a tropical person. My brain stopped working and I ended up walking in the opposite direction of the reclining Buddha. Eventually, I realized the error of my ways, turned around, and located the hospital so I knew I was close. However, the entrance to the reclining Buddha was not very clear to me, and I walked passed it. I decided to give up on the reclining Buddha and instead went to the Five Story Buddha or Nga That Gyi Pagoda (the namesake of the street I have been traversing earlier). My path there is represented by the shorter black line on the map. 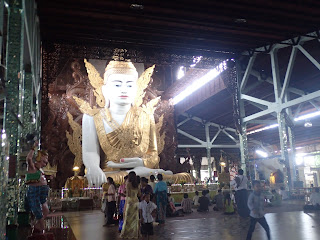 The five story Buddha was actually stunning. Not only the Buddha but the ornately carved wooden screen behind it had me captivated. I say on a bench for about three minutes in a kind of trance until another elderly gentleman sat next to me and tried to make small talk. I was exhausted and really wanted to be left alone to admire the Buddha. The man said he lived on the premises and invited me to visit the monastery where he lived. I thought eventually I would be required to make some kind of donation and I was not up to it. I politely refused but the man sat next to me looking kind of sad. I took out my iPad and pretended to read my guidebook. He sat next to me for a few minutes and then said it looked like I was busy so he would leave. With a sad look on his face he said to me, "Have a nice life," which made me feel kind of like a modernist jerk.

After a few more minutes of admiring the Buddha I stood up only to hear a voice behind me ask, "Where are you from?" The voice came from a fairly well-dressed man with almost impeccable English. He told me that he was an English teacher from a school and showed me the picture. It was actually the school I had walked by. He asked me if I would like to see the school and I said yes. I was wary that I would likely be asked for money, but because I am designing teaching materials for Myanmar elementary schools, I could not refuse the offer. As I walked out of the temple with the "teacher," the modest monk who I had been talking to before gave me a look like I had made the wrong choice. I had a brief tour of the school and was able to talk to some of the students, see a classroom, and learn about the kind of textbooks that they used. To be honest, I was not entirely convinced my guide was a teacher but he did have full access to the school, answered my questions, and introduced me to students. After my little tour, he asked for a donation. I gave him what I thought was a respectable sum for a mini-tour and to my surprise he asked me for more (This led me to doubt his credentials).

By this time, I had lost just about all my energy. I walked to the Clover Hotel near Boyoge Park and took a taxi to my hotel in downtown Yangon. It was around 2PM and I had left my hotel at 8AM. When I got back to the hotel, I went right to a restaurant which had western food and thus catered to a mostly foreign clientele. When I left the restaurant it was pouring rain and a girl who was about 10 was sitting on the sidewalk with nothing to cover her and begging for money. I went back to the hotel feeling depressed. Might my "generosity" (For example with the "school teacher" or see my March post) be misguided and doing more harm than good?  Hopefully in the end I can say that I did some good in Myanmar.
Posted by JH at 11:21 PM

Thanks so much for sharing this experience. The lack of energy you spoke of reminds me of the time we were at the Grand Canyon and you lost the ability to ascend the path further until a stranger gave you an orange. That gave you the energy to complete the ascension. That was in the early 80's.
These travelogues are so great to read!
Love you. YOD

I love these walking experiences; getting a bit lost is often the best way to get a feel for places.

I don't know why, but orange Fanta is my soft-drink of choice in the tropics. It tastes so different (in a good way) from that which I can get here in Japan, or back home.

I wouldn't beat yourself up about the donation thing. If someone is guiding you around a school, I think it's the natural thing to make a donation. Shame he asked for more, but that's not entirely unexpected.

A fun read. Thanks

Thanks for the words of wisdom Tom!

Thanks for reading dad. I don't remember getting an orange from the stranger. Sorry for slowing you down.