I am in Yangon, Myanmar for the next couple of weeks working on a textbook project. On the weekdays I am at work but on the weekends I am completely by myself in my hotel in downtown Yangon. Yesterday, when I was walking near the Pansodan Jetty I met a 13 year old boy named Jeim. From the Jetty, there was a ferry which crossed the other side of the Yangon river to Dalah. 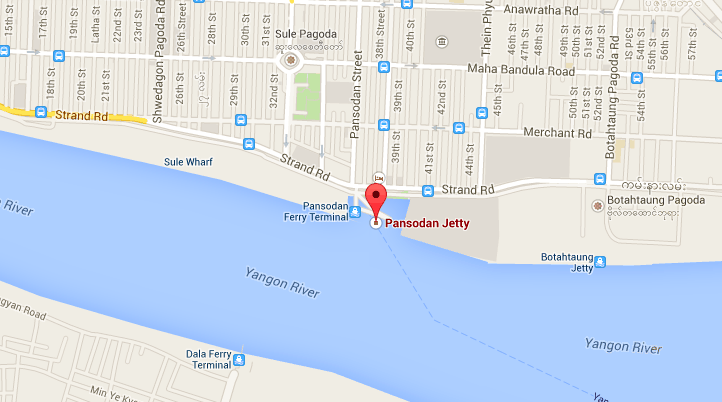 He was selling postcards. He said that he used to live in Dala but his dad died in the tsunami (referring to the super typhoon of 2008 which everyone calls "a tsunami") and he quit school to support his family. He said that he had a brother and sister who lived with their grandmother in a rural area. He and his mother were squatting in Yangoon and living off his income. He asked if he could be my guide because he does not make much money from selling postcards. I was very surprised at how good a communicator this boy was. In fact, to be articulate as he was, I thought that he likely had a talent for learning languages that most people do not have. A couple of hours before meeting Jeim, I had talked with a university graduate for about 30 minutes who could not communicate as well as the thirteen-year-old postcard seller.

To make a long story short, I agreed to go on a tour of Dala with him leaving at 9:00 AM the next day. Dala is a collection of villages and offers a glimpse of the traditional stilt houses that the Burmese live in outside Yangon. He told me that he would show me how Myanmar people really lived.

When I showed up at our meeting point a little past 9AM Jeim was not to be seen. As I started to cross the bridge over Strand st. Jeim appeared out of no where. We took the ferry across the river and Jeim told me we would need to hire Trishaws (bicycle taxis) to see the village (he was right). We ended up hiring two trishaws, one for him, one for me, and spend 90 minutes riding around the village. He was right, I could see how the poorer rural people lived and it was fascinating. The trishaw driver and Jeim also did a good job explaining to me every thing we drove by. I saw one pristine looking pond and Jeim said that was where everyone got their drinking water. Free water and food were also supplied to people by the local temples. There were a couple of things about this experience that bothered me.

First, when we stopped in one of the villages, Jeim asked me if I would like to buy biscuits for the children. The children were poor and hungry. I said yes but felt a little strange because it felt kind of like someone asking the dumb tourist if they wanted to by animal feed to give to the wild animals. We arrived at a stall and about 20 adorable children made a line. Jim told me that one back of biscuits (15 packs inside) would cost 4000 kyat (about 4 dollars) and I knew that this was an exorbitant price. He asked me how much I wanted to buy and I said two. The children wanted to eat, I wanted to give them food, but I also felt I was being had and they were using the cute children as a means to make a big profit off me. The day before, I had eaten a bowl of noodles and two pepsis for 1500 kyat (about $1.50). I ended up buying two bags of biscuits for 7000 kyat and giving them to the kids. The trishaw drivers and Jeim made sure that each child only received one pack. Jeim told me that the kids parents were working in Yangon and they would not eat until they came back home.

Second, the Trishaw drivers tried to charge me an incredibly exorbitant sum which I negotiated down to just an exorbitant one. I should have negotiated beforehand but I had thought Jeim would be looking out for my interest. The trishaw drivers were basically older kids (late teens or early twenties) and obviously had some kind of prearrangement with Jeim. I had a feeling as a little thirteen year old kid he did not have much leverage over them.

After settling with the Trishaw drivers, we went back to Yangon and had a pleasant talk on the ferry. Jeim thanked me repeatedly for hiring him as a guide. We settled to price in a secluded place on the Yangon side of the river. He said that he did not want others to see because they would talk and it would be bad for him. Jeim seemed to know all the ferry officials, the children peddling random merchandise on the ferry, and the young mothers, some begging for money, on the other side of the river. I could understand why he did not want them to see our transaction.

Jeim had asked me to pay what I thought he deserved. I told him how about 20000 khat ($20) which I thought was VERY generous but he then begged me for 30000 kyat or $30. I thought that Jeim had been ridiculously overcharging me the whole day, but the reason why I paid because in a lot of cases, from the trishaw drivers to the woman in the food stall to his mother, it really seemed like he was trying to spread the wealth around to people who desperately needed it. The day before, when I met Jeim, I tried to give him 5000 kyat and he refused it. As a father of three kids, I did not have the heart to bargain down an enterprising 13 year old who was forced to be the man of his family (I do believe he has told the truth). I do not think he is always able to find guide work and his next big payday might not be for a while.

Anyway, I wondered if I was doing more harm than good by overpaying. Will this encourage people to pray on sucker tourists like me rather than perhaps engaging in more honest endeavors? Or, am I just being cheap? These people are poor, do not have the opportunities that I have, and did provide me a bonafide service.

Today, the Jeim and the Trishaw drivers seems to take a sincere interest in learning about the USA and Japan from me as well as learning some English and Japanese. They also taught me some Burmese language. The children and adults in Dalah all went out of their way to say either "hello" or "Mingalaba" to me. Thanks to that, I learned my first Burmese word. Every time we passed a school, Jeim or the Trishaw driver Sam would point it out to me. For someone who is helping to develop English textbooks for Myanmar children, it was an incredibly valuable experience to see this side of Myanmar and imagine how an English class might occur in this kind of situation. Overall, I am glad that I did this. Next time, though, I'll make sure that I pay a good price but not a ludicrous one.

Here is a picture of me and Jeim, I really liked the kid and hope things work out for him. 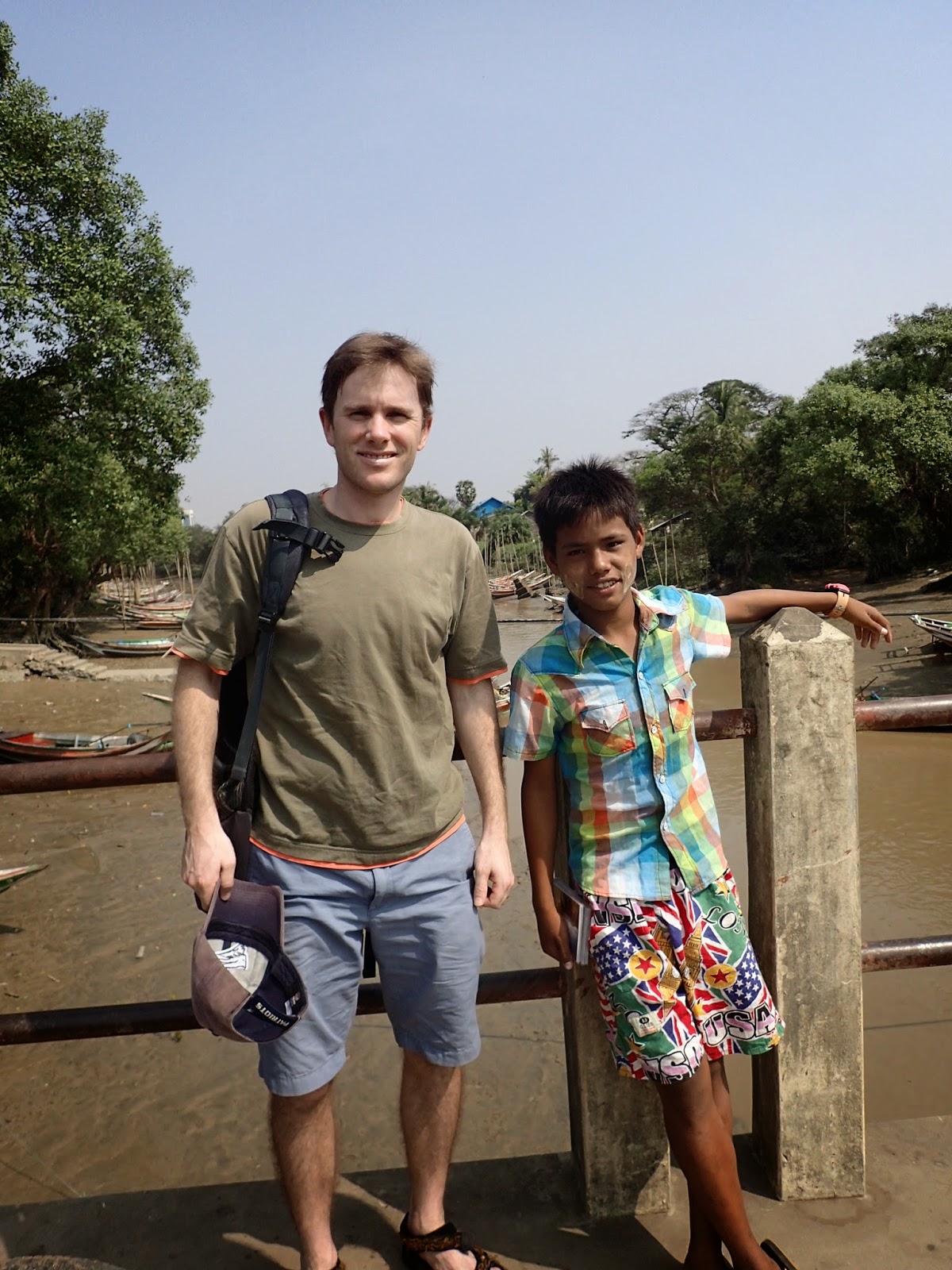 I'm familiar with those very confusing feelings that are hard to resolve in those situations abroad where you know you are being charged much higher than the local rate, but then you look at their situation and actually think about the dollar value and it becomes nothing. It seems high, but it's not. The feeling that you're being taken advantage of is still there, though. Hard to reconcile.

Why are we so blessed while others suffer so much?

Thanks for sharing that Jamie. Good on ya!

Aaron,
The reason why this blog exists is because of YOU and your online class!
You have articulated my own feelings better than I could. Thank you.
In the end, I could reflect upon this experience and learn from it in my nice air conditioned hotel room while Jeim and the others are still living day to day.
Thanks for the words of wisdom.
Jamie