Giving a Workshop about Thailand at a High School in Akita

This was a while ago but in late August I visited a high school in Akita. I was asked to give them a university style lecture so that they could get a taste for higher education and develop interest in applying for university. On the day that I went, there were actually 14 or so different professors representing different institutions. I gave two 90 minute workshop style lectures and was fortunate enough to be one of the more unpopular "lectures" only having 14 students sign up for each one. I call myself "fortunate" not because I like being unpopular but that 14 is an easy number to work with and I can get a chance to talk to all the students.

The topic of the workshop was school life in Thailand because my department has a teaching internship in Bangkok and I had some material I could readily adapt. Here is what I did in the workshop.

Part 1: Ice Breaking: Four corners
This was surprising successful. I gave the following statements one by one on Microsoft Powerpoint. In each corner of the room, I posted one of the following signs: I agree, I disagree, I don't understand, I don't know. When the students saw a statement, they went to the corner of the room that best expressed their feeling. When the students went to their respective corners, I then called on a few students to explain their reasoning. Of course, this activity was done in Japanese. This activity and the statements came from a social studies teacher I know, and the students were eager to tell their opinions. What was interesting was that in the first workshop, most students agreed with the first statement but in the second workshop most students disagreed. Those students who agreed said that they felt it was important to pretend you agree with people even if you might not so as to not make others feel uncomfortable (I think the Japanese translation is slightly different from the English). Those that disagreed said that you had to be true to yourself. 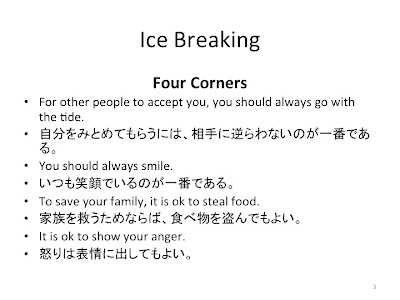 Anyway, I have tried four corners using different statements in a variety of workshops and usually this has been very successful.

When introducing my department, I gave an overview of a students' four years and tried to emphasize that students' involvement with English shifts from studying English itself to learning about the world, their area of specialty or undergoing new experiences using English as a means of communication. Here is the slide (I apologize if there are mistakes with my Japanese): 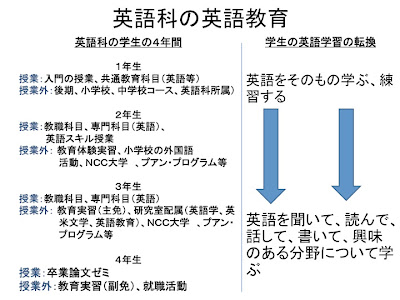 After this, I said that we would learn about Thailand and English would be the language we would use to study it. 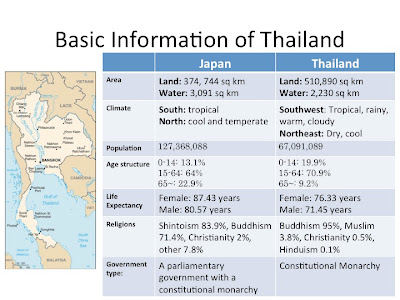 Part 4: A Thai and Japanese English Class
I showed a short video of an English class in Thailand and an English class in Japan, both of which I had filmed. I asked students to write the similarities and differences between the classes. This was done in Japanese. Similarities included students' greetings at the beginning and ending of class, uniforms, and the high status of the teachers. Differences included textbooks, the noise level of the classes, and the activities.

Part 5: A Profile of a Bangkok Family
I showed the students a DVD about a family living in Bangkok from the Families of the World series. I have found that if I turn on the English subtitles and pause the DVD frequently asking questions that students can follow the story. I gave students the questions in the left column and every minute or so, I would stop the video and ask the students to answer the questions. 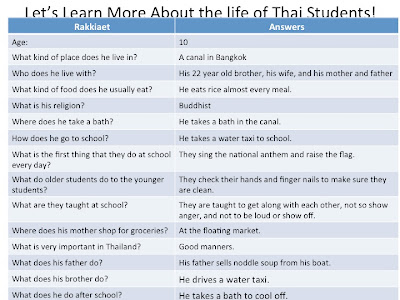 Unfortunately, we did not get to finish the video but the point of the workshop was basically for students to experience university English and maybe leave the class with rekindled curiosity about the world outside their high school and increased interest in pursuing university study. Students supposedly did write their responses to my workshop but I have yet to receive them. I had been waiting for the responses to write this post but I realized that if I do not write soon, I will completely forget what I did.
Posted by JH at 11:06 PM