Well, I wrote a somewhat positive post last time about students' reactions to the vocabulary notebooks (VNs) in the last post. Well, after the students' first quiz, strictly speaking from the standpoint of the results, the VNs appear to have been almost worthless. 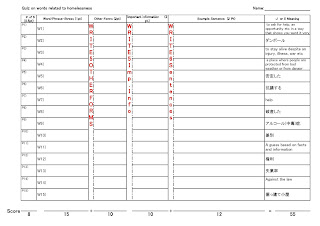 In the quiz, the students had an English or Japanese definition of a word in our textbook. They then had to write the English word and part of speech of that word. Then, they had to write "another form" and "important information" for 5 of the words and "example sentences" for six of the words. For other information, they were supposed to write information that would help them use a particular word. For example, for a verb such as "protest" the could write what prepositions go it, such as "against." For the example sentence they could write something like, "We protested against the new tax law." To find out this information, I was hoping that they would use a dictionary and had devoted quite a bit of class time to demonstrating such dictionary use strategies and made a rudimentary webpage that linked to various dictionaries.

I do not have the exact statistics with me but of the 21 students who took the quiz, only about 4 wrote five entries for "other information." Also, only four students could demonstrate that they knew how to use a word in the "example sentence section." Sentences such as "My brother is alcoholism" for the word "alcoholism" and "I protest to the law" for protest showed me that many students had no idea how to use the words.

I did not collect students' vocabulary sheets but I did ask students to write about the quizzes in their action logs. The majority of the students who did poorly simply wrote that they did not study. Others wrote that is was difficult to understand words that were defined in English. Lastly, others wrote that it was too difficult for them to write example sentences. Obviously, one factor is that students did not study. Even if they did not study, though, I would think that through writing their VNs and experiencing the words in class, they would still be able to make good guesses about how to use the words. This was not the case which means that another undeniable factor is that the students and I are not on the same page about using VNs as a means of developing productive knowledge of the language.


Tomorrow, we will have class again and I will emphasize the following:


Second, I will go over why I think writing "How to use" information is important and show them how to do it again. Basically, in the end, I cannot teach them how to use English, they have to teach themselves and using dictionaries to confirm how to use a word is one way (of very many).


In a couple of weeks, I will provide an update. I will also collect their vocabulary sheets to determine what kind of information they wrote.

Have you considered somehow including more context for the words in their VNs? The collocations is a great thing for the students to take note of, but maybe rather than just listing them or the alternate forms of the words, you could ask them to include several sentences per word, illustrating the use of the associated prepositions, adjectival form, etc. Especially if you can encourage the use of some large, easily searched corpus where they can find examples, additional sentences might help them cement the usage in their heads.

Thanks for your comment, Phil. There is a place in the VNs for students to write an example sentence. However, it seems like many of the students might have blindly copied sentences into the VNs without really processing them.
Two days after writing this post I met with the students and demonstrated how understanding associated prepositions etc. can really help them learn to use a word. We'll see whether or not they start using these strategies or not.
Online learner's dictionaries can provide fairly easy examples but do you know of an online corpus targeting English learners?