Adapting a Task to a Junior High School (An Update)

In a previous post, I wrote about the how my graduate students and I were struggling to adapt a task to use at a junior high school. After a lot of negotiation, we were able to agree on a framework for conducting the task. The framework was based on the one in Jane Willis's A Framework for Task Based Learning . The task type was a Jumble. In a jumble, students have to arrange strips of text into its correct order. For the jumble, we used the story "Sylvester and the Magic Pebble" by William Steig. We made cards of the story (see below). Each card had a picture from the story and we rewrote the text using mainly words that the junior high school students had studied up to that point. 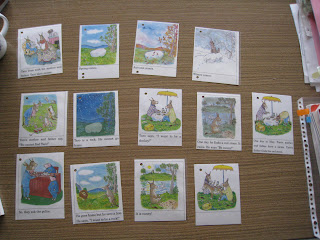 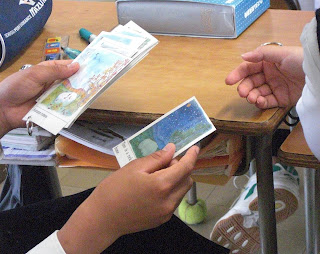 
Perhaps the main goal of the class was number 2. Although the JHS students had many opportunities to write English, read English, and use English in speeches, they had little experience using English in free, spontaneous speech.

Below is how the class was organized.

Pre Task
1. The teachers introduce the topic:
Teachers, "Today we are going to read a story about a donkey named Taro. Taro likes stones. In the story, Taro finds a magic stone but something terrible happens to him. What happens?

2. Teachers tell students the goal.
The teachers wrote the goal of the class was "To put the story together in English". This goal was a little difficult for the students to understand.

4. Teachers demonstrate how to do the jumble
The teachers demonstrates to students how to do the jumble and pasted phrases they thought would be useful for students to learn on the blackboard (See the picture below).
The teachers explained that there were two rules for jumble: 1) The students should read and understand the text first. 2) The students should use only English and they can use the phrases on the board. 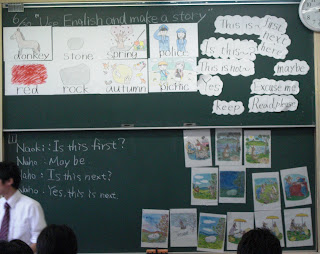 5. The teachers confirm that learners understand the instructions
Actually, the teachers only did this in one of four classes. This class was the most successful class.

Planning
1. Students write a transcript of the dialogue they had in the task.
The point of this is for students to be able to analyze the English that they used in the task.

2. The pairs make groups of 4 and each pair reenacts their dialogue. The pair that is listening is supposed to write down useful words and phrases.
The point of this was for students to hear the phrases their classmates had used for the task and learn about the variety of language that could be used.

Reporting
1. The teachers call on various students to perform their dialogue in front of the class.

Post Task (Language Focus)
1. The teachers give students metalinguistic feedback on the reports.
2. Students write a self evaluation

Positive and Negative Aspects of the Classes
I will start with the positives:

JHS students made a strong effort to use English.
One JHS student wrote the following:(Jimbo translation)
"I was able to confirm the meaning in English with my partner when I did not understand something. It was really difficult to use only English but I was surprised that I could do so by using such simple phrases as 'Yes' and 'This is'."

JHS students realized the importance of using English.
One JHS student wrote:
"Up until now I could not really use the English that I had studied, I was not so skilled at English. From now on I was to study 'English that I can use". (Jimbo translation)

The JHS students were able to learn from friends.
"Listening to other people's conversations, I learned a lot of new expressions and could use them. I want to use these expressions in the next class." (Jimbo translation)

The JHS teacher reported that students’ comments made her realize that her students wanted to try speaking more.

Here are the negative aspects:
After each class, students were asked to comment on how much English they used in the jumble. Here are the results:

Class D was the only class where the teachers confirmed that students understood the demonstration of the jumble task. The students said no and the teachers gave a quick explanation in Japanese. The students then said "Oh, I see" and most succeeded in doing the task mainly in English. In the other classes the students were not sure what they had to do for the jumble task and struggled to use English. Through this experience, we learned the importance of introducing the task well in the pre-task phase. One of my students wrote:
"Even if you have a good task, it will not work unless the teachers present it well.

In all the classes the students struggled with the "planning" stage of the task cycle. The reason for this was that the teachers told them to write down their conversation but did not say why they should do so. So, the students did not know that they were supposed to transcribe their conversation so that they could present it to their classmates and, so, in turn, their classmates could learn new words and phrases by listening to their presentation.

Students thought that they could only use the expression on the blackboard for the jumble when there were other expressions that they wanted to use.

There was not sufficient time to go through the task cycle and the class was rushed.

The teachers did not discuss how the sentences fit together after the task.

If the JHS students and the teacher educators are doing a task for the first time consider an alternative framework to Willis's task cycle
Personally, the cycle has worked for me well. However, if teachers and students are doing the task for the first time it will take them longer to complete the task. Fifty minutes if probable too short. Thus, we should consider thess options:
Posted by JH at 12:24 PM

Hello good day to you!

I’ve read your blog and find it very much interesting. Can you do me a favor? Can I ask you to post my link in your blogroll/sidebar? In return with that I’ll write an article for you which are related to your blog. In this way, we both can benefit since there would probably more visitors in your blog and mine as well. It would be my pleasure if you will accept my request. Thanks in advance!

Hello from the States. I ran across your blog and wondered if you knew a student teacher of mine who went to teach English in Japan several years ago. His name is Warren Decker. If you do, tell him that Mark Alford said hi.

Nice blog, by the way.

Dear Lord Alford,
Unless he is in my neck of the woods, there is an astronomically low chance that I would know Warren.
By the way, I took a peek at your blog and thought it was interesting. People say that mythology is a way that helps us understand the world and it is an element that is missing from our modern society.
Jimbo

Dear Audrey,
G'day!
I have yet to make a sidebar of links but when I do I will post the link to your blog.
Jimbo

I figured it was a long shot. Thanks for the kind words for my blog. I really need to add some Japanese myths to my page. Maybe I'll get on that this week.

Excellent blog on teaching English in Japan. I enjoyed reading your interesting blog! I know of a wonderful website which promotes classroom management. Once you register a wide range of free practical classroom resources are available for instant download. You can also receive the acclaimed step-by-step classroom management e-course free.

Looks like teaching in Japan is a lot different then in Korea.

Might be my next stop. Thanks for the insight.

That´s an interesting blog you´ve got here... I teach English in Spain and I´ve loved to read about your experiences in Japan. It´s quite enlightening sometimes :)

Man, that's some great information - I wish I'd had stuff like that when I was teaching there.

Hello there. I am a dispatch ALT in Wakayama and I was totally blown away by your site. I am gonna try and improve all my lessons from now on.
I recently started a blog about teaching. Basically just started!