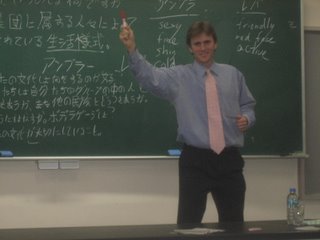 Two days ago, I went to a high school in a medium-sized city in Iwate. I gave a class to 40 high school students (from different homerooms) interested in my university. The high school requested that I give a "university lecture"for about an hour and then take questions from the students for a half-hour. I did a lesson about culture and talked in Japanese. This is what I did:
Ice Breaking: Students line up by birthday. They cannot speak nor use their hands. They can communicate by winking the months and blinking the days. After students made a line, I planned on putting them into groups of four with 2 boys and 2 girls in each group (this was essential for the main activity).
What actually happened: This activity proved to be difficult for the students. They felt embarrassed to wink and blink at each other and the line was never created. This activity is usally works well at the university, but high school students are a little more self-concious. After I put students in groups of 4, we had another problem: there was a lot of tension between the boys and girls in the groups.
Introduce the Topic: I said our goal today was to learn a little about what culture is and investigate some of the problems and understanding that might occur when people of different cultures meet. After defining "national culture" and "microculture", I talked about the different nationalities in Japan and the very high school I was visiting as examples of a microculture.
Examining our own culture: I gave the following scenario to students: "A group of aliens from Mars has just come to your high school. They are friendly people and have been across the universe researching the culture of other planets. They have come here to learn about the culture of your high school. Remember they know nothing about high schools on earth. Please brainstorm what you would tell them. For example, What do you eat?; What do you wear to school?, What do you do in school?, What do you do outside of school?". I gave the groups a few minutes to brainstorm some things they would tell the aliens and then called for volunteers to give some ideas. After some coaxing, 7 students gave ideas. The most frequent response to the aliens' inquiry was "we work hard", so I told the students that the aliens might consider the students of the school to be very busy.
I believe if I had done the following this mini-activity would have worked better:
Have each group choose a person to present before the activity started and tell each group that they have 5 minutes to come up with at least two ideas. I realized that brain storming is supposed to be a stream of ideas expressed freely, but students who are not used brain storming probably need to have it more structured at first.
The Anbura and Leba Activity:
Students formed two cultures; the Anbura and Leba. The Leba culture was very outgoing while the Anbura culture was much more reserved. Half the students received Anbura description sheets and the other half received Leba description sheets. I then asked students to read the sheets and gave them some questions to answer about their respective cultures with their groups. We then had an "Anbura, Leba Exchange Meeting" where students pretended to be the other cultures.
Students seemed to understand about their cultures. However, when the role play started most of the boys decided they were too cool to participate but many of the girls were really into their roles.
After the exchange, I asked the Anbura what they thought of the Leba and vice-versa. Some students answered in jest calling the other culture "sexy". Other students gave serious answers: one Leba called the Anbura "shy" while another Leba called the Anbura "cold". I then had the Anburas read their descriptions to the Lebas and vice-versa.
I told the students the point of this exercise was the following:
The descriptions of each culture written on the paper students read was objective and positive. However, a lot of students impressions of the other culture they met was negative. The Anbura were seen as cold by the Leba but the Leba did not know that the Anbura had a protocol for interacting with other cultures. Thus, we should not be hasty in making negative judgments about other cultures. I completed my "sermon" with some personal experiences I had in Japan where I made hasty judgements about people which I later regretted.
Conclusion of the class
The ending of this class should have had a period of reflection for the students but I had already used up an hour and ten minutes.

My Overall Impression of the Class:
Like my previous experience at the junior high school, it is not easy to go to a school and give a class to children only once. I need to be more conservative in my planning and compromise more of what I want to do to what the reality of the situation is. However, I do not want to compromise too much or I will be giving the students a typical lesson and there will have been no reason for me to come and visit the school.
It is exciting to do a class in Japanese, but I realized that the class is a little drier; it is easier for me to make jokes and be more of a performer when I do a class in English. When I speak Japanese, I sometimes have to devote most of my cognitive resources to producing the language and do not have enough left for spontaneous humor or entertaining performances.
Also, when I make a mistake in Japanese, students sometime laugh and lose their concentration.
Posted by JH at 2:44 PM

I found your blog looking for "JET, Iwate" as I was a teacher for a year out there. It's interesting what you said about the high-school students and the lesson you were teaching. As a JET person they rarely let me actually teach by myself, but the time I did have I often found wasted by similar difficulties that I could not have foreseen. I remember doing a lesson on introductions, and I had made little country flags with representative names on them for a class of about 22-23, and when I passed them out, I recall students trading and talking about "why he got that one and I got this one" and stuff like that... and also -- the girls refused to do the activity with the boys and vice-versa. ;)

Anyway, which high school were you at, and what city was it? I was in Mizusawa, and I actually was looking to reconnect with a teacher whom I haven't seen or heard from since 2003.


Let me know if you get a chance.

Hi Ariel,
Thank you very much for the comment. I have had experiences like the one you wrote about. I think that maybe one of the reasons classes like yours' and mine did not work is that the students spend most of their day sitting at desks listening to the teacher under considerable pressure to learn for their examinations. They have little opportunity to talk to their friends and joke around and group work affords them the opportunity.
JH