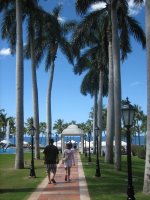 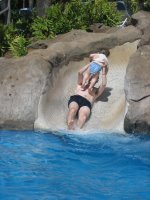 As I have gotten older, I have become less tolerant of the cold weather. Last week, I took my family to Maui for 5 days. At first, my son was petrified of the water either at the pool or on the beach. He remained petrified until his mother took him down the water slide in the hotel pool. The excitement of the slide made him forget about his fear of the water. In the picture to the left, my son and I are going down the water slide at the hotel. To the right is the path I walked down every day to go to the beach.
After living in Japan for 7 years, my stomach has told me it has decided it prefers Japanese food to American food. When I first came to Japan I thought the food was bland and unfilling. Now, though, rice is a staple and when I go to the states I find the food either too oily, salty, sweet or just too much.
Posted by JH at 12:36 AM

Yo, I totally understand your predicament with food. I find myself filling up 5 minutes into the meal whenever I go out back in the States. Add to that the normal stress on your digestive system during traveling and you've got a lot of time to spend with John.